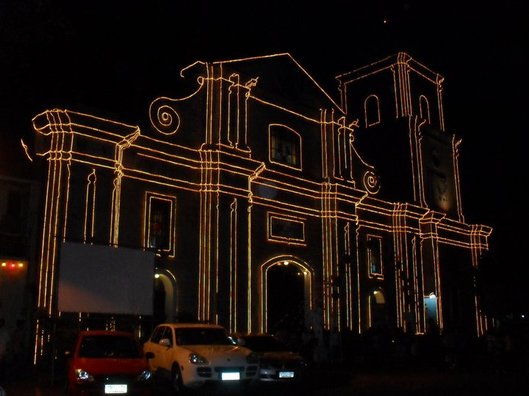 The Diocese of Imus comprises the whole province of Cavite. It was established as a separate diocese from theArchdiocese of Manila on November 12, 1961. The diocese was canonically erected on November 12, 1961. The Cathedral Parish of Our Lady of the Pillar, located along Gen. Castaneda St., Brgy. Poblacion, serves as the seat of the diocese. It is also one of the 12 cathedrals founded by the Order of Augustinian Recollects in thePhilippines.

The Diocese includes 2,210,000 Catholics with five districts, 10 vicariates, 44 parishes, one shrine (Our Lady of La Salette Shrine in Silang, Cavite), and 95 diocesan and 89 religious clergies for a total of 184 priests in the diocese.

In 2011, the Diocese of Imus celebrated its Golden Jubilee as diocese since their establishment in 1961. Activities will be held within the diocese to mark this momentous event. Part of the celebration was the 5th Asian Youth Day held in the diocese.

The bishops assigned in the diocese are as follows:

The patroness of the diocese is Nuestra Señora del Pilar. Her feast day is every October 12 each year. Karakol, a religious procession-dance, is held in her honor during her feast day.

History
The Catholic faith first came to Imus in 1571. Among the religious orders that Christianized the Caviteños were the Franciscans, the Recollects, the Dominicans and the Jesuits. They established their first center of faith in Cavite (now Cavite City), then in Silang in 1581, in Kawit in 1587, in Maragondon in 1611, Indang in 1655, Ternate in 1700 and in San Francisco de Malabon (now General Trias) in 1758. Through the zeal of the first missionaries of faith spread fast I the area. The missionaries also helped in the founding of most of the towns in Cavite. As early as 1614 Cavite became a politico-military province.

The province of Cavite is rich with historical significance. It had been the site of many battles ad uprisings against Spain, one of which was that of 1872, which resulted in the execution of three priests: Gomez, Burgos and Zamora. Cavite is also where General Emilio Aguinaldo proclaimed the Philippine Independence under Spanish Rule on June 12, 1898, in the town of Kawit.

The province is named after its shape, that of a hook – hence Kawit, meaning hook, in Tagalog. It is geographically situated at the very entrance to Manila Bay, a location which has made it, along with Bataan on the north, the scene of many battles in the past. It is bounded on the northwest by the Bay, on the northeast by the provinces of Rizal and Laguna, on the southwest by the province of Batangas. Its capital city is Imus, with the seat of the provincial government located in Trece Martires City.

Early in the American regime a U.S. naval garrison was stationed at Sangley Point in Cavite after civil government was established in 1901. Because of mutual defense agreements, this base remained in Cavite long after the country was granted its independence in 1946.

The topography of the province is rather flat, so rice is an important crop. Fishing is another major industry, taking into account its coastal waters. The language spoken is Tagalog, now the national language of the country. More than 60 per cent of the inhabitants live in urbanized areas because of its proximity to Manila. Today Cavite is witnessing a more radical urbanization as factories, subdivisions, golf courses, resorts and an export processing zone (EPZA) have sprung up in the province. Tagaytay City, with its cool climate and a scenic view of Taal Law and Taal Volcano draws many tourists each year.

The Diocese of Imus was created on November 12, 1961. It comprises the civil province of Cavite and covers a land area of 1,287 square kilometers, with a population of 1,643,549 of which 76 per cent are Catholics. Its titular patron is Nuestra Señora del Pilar. The diocese is a suffragan of the Archdiocese of Manila.

There are 5 districts in the diocese, with 10 vicariates, 41 parishes, 2 quasi-parishes, and 5 pastoral centers served by a total of 80 priests. Among the religious organizations are the Legion of Mary, Catholic Women's League, Adoracion Nocturna, El Shaddai, Knights of Columbus, Catholic Youth Movement and Couples for Christ.

Golden Jubilee
CelebrationIn 2011, the diocese celebrated its Golden Jubilee since its separation from the Archdiocese of Manila. The festivities centered on the theme "Tena't Mag-KA-RA-KOL," which alluded to the "karakol," a pray-dance procession performed in fiestas in Cavite parishes. "KA" stands for "Kahapong kay yaman" - an introspective look into the glorious history of the diocese, while "RA" represents "RAdikal na pagsunod kay Kristo," a call for reconciliation and conversion into the fullness of God's love by following the example of Jesus Christ. Finally, "KOL" stands for "KOLektibong pagkilos," which envisioned a collective effort on the part of all Catholic faithful in the province to fulfill its mission of spreading God's word.

Prior to the jubilee year, a three-year preparation for the celebration (from 2009 to 2011) was led by Bishop Tagle, who is now appointed as the Archbishop of Manila. He led the opening of the jubilee year with a mass held at the Imus Cathedral on the midnight of the foundation day of the diocese. Among the highlights of the event was the opening of the cathedral's Jubilee Door, where all the Catholic faithful who will pass through the door will be granted plenary indulgences. The Golden Jubilee celebration will conclude with the solemn canonical coronation of Nuestra Señora del Pilar as the queen and patroness of the Diocese on November 26, 2012.